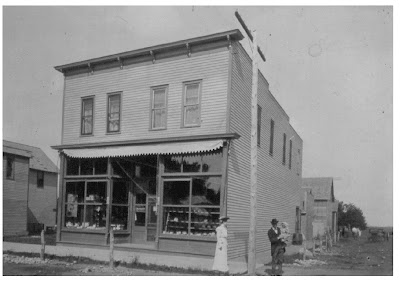 Brandon MN
This building was constructed in 1898 at 109 Central Avenue North in Brandon. There were living quarters upstairs with both an inside and an outside stairway. A well was dug on the south side of the building and the pump was installed on the second floor landing or porch. Carl A. Wold and his brothers, John, Ole and Pete, were engaged in the general merchandising business in this building for seven years, and at this time Carl published the Brandon Echo. Three years later he moved to Alexandria where he reorganized the paper and named it the Park Region Echo. In 1914 he became a member of the Legislature. His wife, Eva Emerson Wold, was at one time Douglas County Superintendent of Schools. No exact date has been found as to when the building was converted to a feed and seed store. Albert Haber was the manager of the business when John Renkes came to work in the mill J.O. Renkes purchased the business in 1920 and continued to run it until 1977. The building was taken down in 1986.
Posted by Brandon Mn History Center at 3:32 PM